Courtesy of Bill and Janet Liebsch of Arizona Preppers Network

Iceland’s Eyjafjallajökull (also known as Eyjafjöll) eruption has been causing headaches for many in Europe and around the world due to flight cancellations, ashfall and gases. 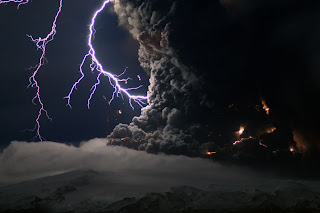 Some of the comments on recent articles have been amusing like “climate change is causing the eruptions” (implying it’s man’s fault) or “how could something like this happen in Iceland”. People … stop, take a deep breath, look at history, and remember we live on a violent planet.

For example, did you know Iceland – which has 30 volcanic systems and more than 600 hot springs – straddles tectonic plates on the mid-Atlantic ridge, making it one of the most geologically active places on the planet?!

The last time Eyjafjoll erupted [in 1823] it spewed for 14 months straight. And history shows the eruptions may trigger its far more powerful neighbor Katla. According to the CS Monitor, the last major eruption of Katla – a volcano that averages 2 eruptions a century – was in 1918 which is why scientists are watching this very closely. And Katla is just one of the “Angry Sisters” … its even-more active twin is Heckla. Heckla, known in early times as the Mountain of Hell, has erupted 14 times between 1104 and 1970.

According to the BBC, one of the most influential volcanic eruptions in Iceland was the 1783-1784 event at Laki (a fissure with 130 craters) where an estimated 120 million tons of sulfur dioxide were emitted, approximately equivalent to 3 times the total annual European industrial output in 2006.

And the above statistics are just from 1 tiny island. Now, how many active volcanoes are there in the world? According to the Smithsonian Institute’s Global Volcanism Program, the answer to this question depends upon use of the word “active” …

– At least 20 volcanoes will probably be erupting as you read these words (Italy’s Stromboli, for example, has been erupting for more than a thousand years);

– about 450 historically active volcanoes are in the Ring of Fire around the Pacific Ocean;

– and (our favorite statistic) … some estimates of young seafloor volcanoes exceed one million.

And remember, all active volcanoes spew and seep sulfur dioxide, carbon dioxide and other nasty stuff … and there are hydrothermal vents (and black smokers) deep underwater around Antarctica and all across the ocean floors. So… instead of blaming mankind for global warming or climate change, just realize Mother Nature belching and releasing gas impacts our planet immensely.

Check back tomorrow for Part 2 of 3 on Supervolcanoes.