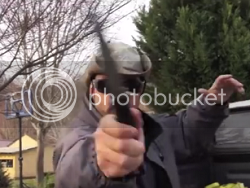 Manny: “I’ve got a lot of knives. You might have seen the 30 minute video I did on YouTube a couple years ago that shows pocket knives and survival knives and all kind of cutting tools, but one thing I didn’t have was a knife that I could deploy horizontally off the belt. So, now I’ve got one of those and I’ve had it for several months and using it. I am going to review it for you today.”

“Whenever I had a knife on my hip it was always getting tangled up in my seat belt when I sat down or poking into the chair or somebodies leather couch or the seat of the car. I wanted to find something horizontally at the belt. So what I got is the ESEE 3. I’ve had it for six or eight months now and been using it really hard. It’s my go to knife now. I wear it all the time, every wear I go because it is so handy. Yes, it’s short but you can get it longer if you want.”

“The ESEE 3 is 3.88 inches from tip to the handle and its got a 3.38 inch cutting edge. The four is longer. The five is longer than that and the six is the longest. If you want to wear it horizontally I think a three or a four is as long as I would want to wear comfortably at the belt. If you’ve got to much stuff in your pocket or your belt it’s gonna pull your pants down and be uncomfortable, but this is not bad at all.”

“So I can take it out one handed like this, but then when I put it back I can hold the sheath and as long as I can I do it visually to make sure the tip is going into the sheath and not gonna cut into my hand. So I watch the blade go in there and then I pop it in.”

“You can do it one handed okay. Put it in like this and then grip up here on this grip and squeeze it in. So now it’s in there.”

“When you get the knife you get the knife and this ABS plastic sheath. Now I have read on the forums that there are people complaining about the fact that it’s not Kydex but ABS is perfectly adequate for what this needs to do. You don’t get this clip that is a separate item you have to buy separately. You just get this clip that closes down over your belt. These things you can adjust up or down narrower for a smaller belt or wider for a bigger belt like mine. To open it you just pull this and then squeeze these open.” 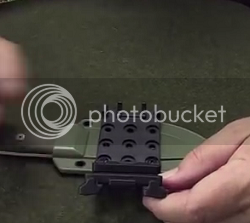 “The sheath has this drainage groove in case you get water in the sheath which is important because the blade is made of 1095 Carbon Steele which does rust. As you can see I’ve already got some rust on the cutting edge. On top where this protective coating has worn off from all the batoning I’ve been doing. So there you see a little patina.”

“So is it a problem for it to rust? Well, yes. You don’t want your carbon steel blade rusting. But you can prevent it by using rust inhibitors or like you can buy a cloth you rub on the blade and it prevents rust or you can oil it.”

“So why carbon steel? Why not get stainless steel and not deal with the rust? For me, it’s a practical issue. I have had a lot of 1095 knives all my life and I know how to sharpen them and that really is the issue because when I go for my knife I am not reaching for an ax, or a hammer, or a screwdriver or a pry bar. What I need is this thing to cut. I’ve pretty much got it down as to how I can get a good cutting edge on it.”

“I like it relatively for the factor of the whole thing. Just because of the way I carry it, horizontally. When you first get the knife the mycarta smells. It’s got kind of an offensive burnt plastic smell to it that is pretty unpleasant, but it wears off after a time and no it has no odor whatsoever.” 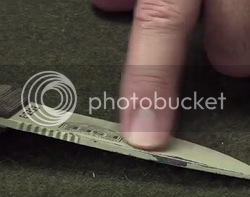 “It’s a one eighth inch thick blade. If you get the mill model it is gonna come with a sharpened spine and a partly serrated edge right here. A sharpened glass breaker pommel. It also comes in another model that has a rounded pommel. This one comes with a good coating on it, but it’s wearing with all the batoning I’ve done on it.”

“This finger toil is good if you ever need to do any very close carving work right here near the end of the blade. It always makes me nervous to do that because I’m afraid I am going to cut myself so I’ve just learned to grip it like this and keep my index finger on the grip and then get what leverage I can like this.”

“The blade is wide and instead of cutting off this belly and going straight to a point right here you have this big rounded piece of metal. Now what does that do? Well. Let me demonstrate. Okay, because of this belly, if I wanted to feather out a fire stick carving it like this. I can work using the belly near the tip of the blade and use all this longitude force and what that does is it doesn’t tire out my wrist so much. Here is what I mean, I am feathering out here using the big fat belly on the blade.”

“An interesting thing for you guys is it actually comes with more of a belly than you see here, but I’ve used it so much I’ve sharpened it down so now it is flattening out a little bit.”

“If you do break it, these guys guarantee it for life. So if you break it, send it, they will replace it. About this coating wearing off, I would say that is probably normal wear and would not be covered by a warranty. I don’t know if they would charge you to resurface it but I don’t think it would be a problem to put a new surface on this. The thing is, it is kind of pointless because as soon as I get it I will wear it off again. So, I’m just gonna live with it like this.”

“Well, that is my long term review of the ESEE 3. I am really pleased with ESEE knives. I have found nothing about it that I don’t like. I have no hesitation recommending it to you. If you don’t like this kind of knife, if you don’t like 1095 steel just leave a nasty comment OR go find a knife you do like.”

“Hey, thanks for watching and go to the blog. I have a write up on this knife. See you there.”