Video By: TJack
Please support him by subscribing to his channel

T.: Alright guys, this is Tyler with TJack survival and we are here with Matt with the Boulder Outdoor Survival School. And we are going to do a tandem hand drill. So, stay tuned.

Alright, guys. So, basically what we’re gonna do is just show you how to do this with two people. And the main reason that you would wanna do that is because it’s exhausting, especially if you’re a noob like me. So, I just wanted to bring a professional. Alright. Okay, cool.

M.: Well, the first thing we need to do is actually burn in a new hole for this. This one… these are all looking pretty spent, so we’re gonna go ahead and start a new pilot hole just over this one slightly. The way I like to do this is having a… This is my hilly bushcraft knife. It’s nice to have a knife that’s got this wide of a blade to it, because the safe way to

drill a pilot hole is actually to choke up on the end of your blade. And that way your fingers aren’t way up at the top and there’s no risk of you slipping down. ‘Cause you really just need that little bit of the tip of your blade. And I’m basically just gonna do little half circular cuts. You’ll notice I’m not doing this in my hand, I’m doing it against the ground, so that the knife happens to go through a weak point, it’s not gonna stab me in the hand. Alright, so we just need to open this up, just enough to see that spindle. And we’ll burn in a new pilot hole. That should be deep enough. Okay, cool. You wanna burn in the new pilot hole? 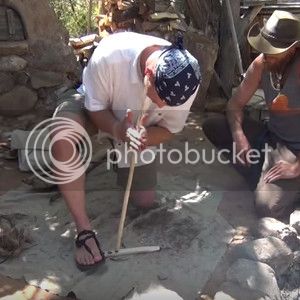 M.: I can still use it, still usable.

T.: Onto the shorthand now.

T.: So, with notching I’ll either put my thumb to the left and pull back, or just set it on the ground and rock it. I usually try to measure it out a little bit, before I start cutting. And then fortunately with yucca, it cuts really easily. I don’t really have to pry on it a lot to get it to open up. And as you start going deeper, I’ll start going lighter and sliding down the edge of it. And that helps me to get a more appropriately shaped notch. I like to go 1/8 of a pie, as how I remember it, and just short of center. That way if I don’t… I go to the center, a spindle blows out.
Now with this, you don’t have to, but I like to just put a little bit of a notch right here at the base part of it. And what that does is leave me a little pocket, so that I can get a little more ember once it starts to fill up. Don’t make it too big because when you go start drilling on your second or third fire, that will cause a blowout, which is what I had up here.

T.: What he’s doing right here is just giving us a collection spot for the char. Once it builds up we have to have a way to transfer it to our nest, which we’ll pull out here in just a sec. You wanna start? You want me to start?

T.: Now what he’s doing is, he’s warming this up. So, if you just kind of chill a little bit and he’s rotating his hands up here. The way I remember it is angled up when you’re going back and go down when you’re going forward. And ultimately, if your hand stays in the same spot, you’re doing it right. If it doesn’t, you’re doing it wrong. So, what he’s doing is he’s warming this up and it gets rid of that last 10% of water that’s in the stick. And then as… as it starts to smoke, it’s gonna start building up this char down in here, which will spill into the hole. Once it spills into that hole and fills itself up, it’ll start compressing itself and that compression puts hot material closer to hot material, which eventually becomes an ember. You’ll know that it’s an ember when the pile smokes instead of the hard border or the base border. That ready?

M.: Go ahead and get ready to take over when I get to the bottom, okay. Alright.

T.: It’s really important not to pull your spindle out it actually gets cold.

T.: We’re getting build up, we’re not getting spill over, so I’m just gonna shift a little down in the hole. And now we’re getting it to fill up and we basically got an ember already.

T.: So, one thing that I like to do is to just tap this a little bit here and it’ll kind of squirt a little oxygen down on the ember. So, if you’re having a hard time, try to do that before you take it away. And if not, it’s not good. You can either tip it over and drop it in. Or I’ll just slide it with my knife, so that I can focus it on the pile, and then rotate and tap it. And that compresses it all down in that ember. We have a little bit of a breeze. The breeze will give it the oxygen that it needs in a fire triangle. Otherwise, if you kind of blow on it, you can see that ember starting up into flame. Alright brother, I’ll let you do the nest.

M.: Alright. Alright, so we got some cottonwood cambium here for our nest. So what we’re gonna do is just give this another second, maybe fan it slightly. Let it get close our nest a little bit more. We wanna get our nest as close to the ember as possible, so we don’t have the transfer it any further than needed, ‘cause it’s still very fragile. I’m just gonna tip it right into that center portion of the nest.

T.: So, a little bit about what he’s doing here. Fire’s made out of three things. It’s made out of heat, it’s made of the fuel and it’s run by oxygen. So, right now the heat’s coming from the ember and the fuel is what it’s surrounded by. That last piece is oxygen. If you smother it too much, there’s not enough oxygen. If you blow too hard, it rips it apart, so it’s just fine balance. And essentially they say you blow as hard as the smoke, so if you have a little bit of a wisp of smoke, use your hands. About medium smoke, start to blow softly. And then right now he’s starting to get ahead of your smoke, so he blows faster and it’s like a train. It kind of… it speeds itself up until you’re on a roll and then eventually get that flame that will burst right out. There’s the flame.

T.: Outstanding, man. So, that was just a quick team hand drill with a yucca stick. If you want to learn how to do this or how to do it well, do it from scratch, where can you come?

T.: Alright, guys. I’ll leave a link to that down in the comment section. It’s boss–inc.com and as always, if you gained value from this, please subscribe and share and comment. Thanks for watching TJack Survival. Alright.

This Transcription is available for copy under the Creative Commons By-ND licence.  You may copy and repost this transcription in it’s entirety as long as original links, affiliate links, and embedded video remain intact, including this CC notice.