One of the most intimidating aspects of the outdoors for novice campers or beginners is very basic:  Where’s the bathroom? Where will you do Number Two?

When you gotta go, you gotta go.  It doesn’t matter if you’re at the shopping mall or in the back country – when nature calls, you must answer.  Generally, if you’re in established campsites, there will be some sort of permanent toilet available, so that’s not an issue.

If you’re camping, or setting up a campsite, one of the first and most important tasks is to set up the latrine.

Here’s how to build one, using re-cycled or commonly-available stuff.  This “technology” has been around Boy Scout and hunting camps for years!

Toilet seat: One of my favorite places to shop for building materials is the local Re-Store, where discounted building materials are for sale, with the proceeds benefiting Habitat For Humanity.  Look around – scrap lumber and other things you need are easily found.

Plastic lawn chair with four straight legs: This can be the basis for the “throne.”  Cut the middle out of the seat, and replace it with your toilet seat. A box made out of scrape lumber is also popular.  Make the height whatever you want.  Dig a hole, and place this structure over it. I could have gotten a toilet seat and lawn chair for $5 last week at the Re-Store.

Posts or some sort of uprights to attach tarps: This is the basis for the privacy structure that goes around the throne.  Drive the posts in around the toilet structure, and string the tarps on them. Obviously, trees, rocks or whatever can be improvised into the screen.  If stormy weather is possible, you might want to rig a tarp over the whole setup to shed rain. 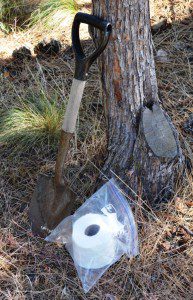 Small shovel: Use this to dig the privy hole, and throw the dirt outside.  Privy rules state that after each use, a shovelful or two of dirt should be thrown in.  This eliminates smells and keeps the privy from attracting flies.

Waterproof toilet paper holder: This can be a coffee can with a lid, or large plastic bag.  You really don’t want the rain to soak the toilet paper.

Your camp will establish its own privy use protocol, but here is one that works.

The shovel and toilet paper container are left on the path to the privy.  Participants take these items with them as they go to use the facilities.  When these items are gone, that is a sign the toilet is occupied.  All campers, when within hearing distance of the privy call out.

Once everything is done, the participant uses the shovel to toss some dirt in the hole.  Then, all the implements are returned to the path for the next person.

When it’s time to move camp, the structure can easily be removed and the hole filled in.

Building a privy structure is easy, and doesn’t take much time.  In addition to keeping your camp more sanitary, the privy is also a comforting thing to newcomers.  It can also provide one more familiar aspect to an unfamiliar environment.

In 1977, I was about four days into a 14-day backpacking solo through the Thoroughfare Creek area of Yellowstone’s back country. I hadn’t seen another person in two days, but the frequent grizzly tracks on the trail were making me really edgy.  I got to the established campsite that evening, and found a nice picnic table, a brand new, immaculate Porta Potty and enough fresh bear prints to scare the crap out of me.

It was approaching dusk, so moving on was out of the question.  I ate supper quickly and hung everything on the bear bag racks. But I still had to find a safe place to sleep.

A strong smell of antiseptic hung around the toilet. Reasoning that the smell would cover up my scent, I went inside the Porta Potty and twisted the latch to “occupied.” I got into my sleeping bag, sat down on the closed toilet seat, and leaned up against the wall to sleep. I dozed and slept fitfully until dawn, awaking at every imagined noise.

This story would be better if I had heard bears moving around all night, but thankfully, I didn’t hear a thing!