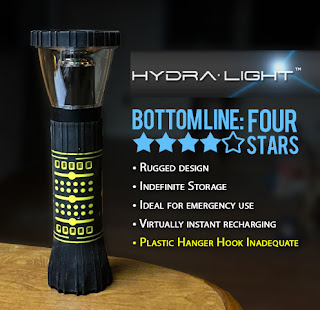 I got word a water powered Flashlight was heading my way for a product review & immediately pictured a contraption with a propeller to dip in a running stream, or some penlight hooked up to a water bottle. Instead, I got the Hydra Light, a foot long, rubber-coated, yellow & black plastic cylinder, looking every inch a serious lighting device. It sported some heft to it too, but strangely, no propeller or water tank.  Instead, inside it was a long white cylinder where a battery would be, with two metal ends and holes along the length of it’s sides.

The end-cap flares out forming a stable base with a recessed fold-out plastic hook to hang it upside down. (Although I doubt the hook will hold up long.)

At the business end, a clear plastic lamp bezel sports a mirrored concave top cover, and an aperture in the center. Around the single white LED inside the bezel, was more mirrored plastic.

The bezel does double duty. Slide the bezel fully extended, the light is configured as a lantern. With the bezel retracted, it becomes a directed flashlight, projecting the light out the end through the aperture.

So far, it LOOKS like a flashlight. But now what’s up with this white plastic can-like tube inside, where a proper battery would be? It looked intriguing.

I learned it’s the fuel cell that relies on a process of Ion Transfer involving oxygen as fuel. The Hydra-Light fuel cell has a generous heft to it. It rattles, which I assume is something that somehow reacts to moisture.

I began to figure out that this ISN’T a water POWERED flashlight as the advertising implies. Instead, water is used another way, as a CONDUCTOR.

A chemical reaction occurs when two dissimilar forms of metal interact with each other. It’s called ELECTROLYSIS. Simply put, molecular ions from one metal flows to another metal when a current path between the two is present. A common example of electrolysis is galvanic corrosion…how Iron becomes rusty when exposed to oxygen. All it takes is a conductor. It just so happens WATER is a conductor, and it’s conductivity is greatly increased when MINERALS are dissolved in it.

It clicked…(like a light bulb over my head). Inside this moistened fuel cell container, enough electrical current is generated when the contents of the fuel cell is moistened and exposed to oxygen, causing Ions to flow from one metal end-cap to the other .

And it’s a single LED that makes everything happen.

While this Ion transfer process results in electrical current being generated, there isn’t a LOT of electrical current. So while the LED is efficiently producing light, it’s not the brightest of lights. The Hydra Light isn’t meant to blind, it’s made to produce light, JUST using water!

Within these narrow constraints, the Hydra Light DOES IT’S JOB, LIKE NO OTHER!

The Hydra Light is ideally suited as a emergency light source, one that can provide light with just water, without ANY other technology.  I get that, and anyone who is desperately NEEDING light when ALL ELSE FAILS would get that too.

The Hydra-Light boasts up to 100 hours of continuous service. One short dunking of the fuel cell in water is all it takes.

THAT I put to the test.

I dipped the power cell in a glass of tap water, shook out the excess water, slipped it in the Hydra Light, and turned it on.  The LED immediately produced a bright blue-white light. As a flashlight it threw a very impressive beam. As a Lantern the single LED was able to light up a totally dark room to a respectable level, not super bright, but still bright enough.  Then I left the Hydra Light on and started the clock.

72 hours later (that’s THREE DAYS), the light was noticeably dimmer, and it went dark while I was away at work at day four. at least 90 hours total. That’s close enough for me.

Again, this is just dunking the fuel cell in water, shaking out the excess and turning the lamp on.

For the Hydra-light, the duration test is more of showing how long the fuel cell will conduct current until the fuel cell dries out. Of course, normal battery powered flashlights can last 100 hours, (often brighter too.)  But after that, you just need to briefly re-moisten the fuel cell of the Hydra Light, & the light can stay on for 100 hours more. (Do that with other flashlights.)

After a few dips in water, the efficiency of the fuel cell diminishes. Still, that’s remedied by simply adding salt to the water. The saltier the water, the brighter the lamp will glow. According to the maker, more fuel cells are available. But generally speaking, the whole idea of a emergency light source that can be left on a shelf for decades, & still be able to produce light after just a dip in some water, is just the thing to have when all else fails.

And for that, I TOTALLY approve.