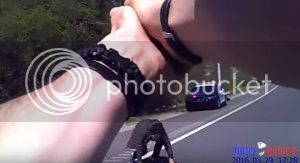 A video featuring the body cam of an officer belonging to the Hamilton County Police, shows the officer using amazing restraint recently went viral due to an encounter between a homeless drifter and local officer, Josh Hilling. The video shows, from beginning to end, the violent and abrupt interaction between the two.

It started off with Hilling approaching the man, asking for his identity as well as social security number. The drifter didn’t appear to know English and had trouble communicating with the officer, at one point struggling to spell his own name. As the officer wrote on his pad, the body cam showed the drifter with his hands in his pockets, slouching.

“Take your hands out of your pockets, sir,” the officer asked, telling the drifter to get closer to his squad car. As the body cam shows, Hilling escorted the seemingly nameless drifter to the back of the car, to which the drifter violently lurched, suddenly wielding a knife. Hilling’s voice got noticeable louder and more aggressive as the homeless man stepped into oncoming traffic fromI-75, flinging the knife. “Drop the knife!” Hilling screamed.

The homeless man backed away from the highway and it the video showed that Hilling had then stepped into the street, stopping traffic altogether as he held his gun out at the drifter. “Drop the fucking knife!” he shouted, making the same command over and over as the homeless man continued to approach him with slow agitation.

The homeless man was identified as ‘Aleman,’ and at one point during the scuffle, Hilling shot Aleman in the leg, though Aleman continued lurching forward anyway. “Kill me!” Aleman shouted, throwing the knife around, “Kill me! Kill me!”

The officer begged for Aleman to stop and tensions rose to an all-time high when the drifter stood in front of the halted traffic, holding the knife to his own neck. “Kill me or I kill myself!” he shouted. Soon, other squad cars arrived and Hamilton County was able to safely apprehend the homeless man by use of Taser.