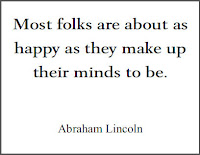 Sunday, according to most religions is a day to contemplate, meditate and dedicate your time and efforts the God, which usually means reading, praying, taking cookies to the neighbors, hanging out with the family. In our home it always means “Sunday Dinner”, usually at grandma’s house as she goes to war with the kitchen; every Sunday she turns her General Electric, Kitchen Aid and Pampered Chef tools into weapons of mass destruction. Recipes past down generation upon generation have little been altered, remaining true to taste and satisfaction testified by family & friends as we moan our approvals when dinner ends.

Sunday morning is quiet, and family members are found reading, studying and pondering various topics of personal interest.
I was intrigued this morning by three little blocks of wood on my desk, each block inscribed with a few words, and when stacked together they read:

“The Time To Be Happy Is Now”

The saying is cliche, yet true. After rearranging the blocks into a different order, which changed the intended statement into a question. I think often about about

the rearranged blocks’ question and internally we know the answer is ‘yes’, but many battle with a remembrance and resolve to a quotidian happiness.
Now do not misinterpret this, because there is much we are all grateful about, just look at the book behind the blocks, a book about positioning yourself in an economically advantageous manner despite what the future will be like, a book about education, and a book about history. The very essence of preparedness positions ourselves emotionally, physically, financially, socially, spiritually and mentally to be without fear, worry and anxiety.

Author, narrator, historian, lecturer, two-time winner of the Pulitzer Prize and recipient of the Presidential Medal of Freedom, David McCullough was my choice of study a few months ago. Having read his books “1776” and “John Adams” I thought it was time for a refresher on McCullough’s works and see what else may peak curiosity & inspiration.
Google led me to a recorded devotional, where McCullough spoke at Brigham Young University on “The Glorious Cause of America”
Impressed with this speech, and contemplating back to the wooden blocks on my desk McCullough talks about the challenging times that our Founding Fathers battled.

“They were living in the present, just as we do. The great difference is that it was their present, not ours. And just as we don’t know how things are going to turn out, they didn’t either.”

David Walker, former Comptroller of the United States, teaches that “We have four deficits: a budget deficit, a savings deficit, a value-of-the-dollar deficit and a leadership deficit“.


There is a leadership deficit in our country today, likewise there were many deficits in the our country during the times of Adams, Jefferson and Washington. By virtue of reason ‘deficits’ themselves are not the corroding powers that threaten to destroy.

Describing Gen. Washington McCullough says “He made dreadful mistakes, particularly in the year 1776. They were almost inexcusable, inexplicable mistakes, but he always learned from them. And he never forgot what the fight was about—“the glorious cause of America,” as they called it. Washington would not give up; he would not quit.”

Great leaders exist today, as they always have. Great leaders are required today to rise forth, just as they have always been required to do in the country’s past. Uniting under that same ‘glorious cause of America’ that the hearts, minds and support of the people may better hedge a path for such leaders to sustain the glorious cause of America is of the highest import.

The anxiety of 2012 should not be the great cause of preparedness. The values, principles and precepts of american preparedness should be lived accordingly and regardless of economic prosperity or collapse. Preparedness is easily prioritized during times like these and while the American Prepper’s Network strongly advises every American to invest in the security of preparedness with a year’s supply of water, food and supplies. We also remind you that ‘today is the time to be happy’.

Tags: Hugh Vail The Time To Be Happy Is Now... Right!?

The G.O.O.D. Board Game Review