Courtesy of Bill and Janet Liebsch of Arizona Preppers Network

As the Earth Hurls (part 2 of 3 – Supervolcanoes)

Although there are only a handful of supervolcanoes, every 100,000 years or so their catastrophic eruptions typically cover huge areas with lava and ash and can potentially cause a mini ice age or threaten extinction. For example, it’s possible the Toba caldera on Sumatra, Indonesia caused enough climate change to almost wipe out humanity 74,000 years ago. And the Siberian Traps are thought to have wiped out 90% of species over 250 million years ago.
Please understand the reason we are covering this topic is not to intimidate or fear monger, but rather to educate people about the existence of these since they play a role in our planet’s history.

Some data and statistics from The Sydney Herald …

The last time a supervolcano erupted was 74,000 years ago, when the Toba caldera threw out nearly twice the volume of Mount Everest in magma. And Toba was more than 5000 times as explosive as the eruption of Mount St Helens in 1980.
Possible contenders for the next eruption include Yellowstone volcano in Wyoming, the Phlegrean fields volcano west of Naples, Italy, and Lake Taupo in New Zealand. However, there are many other areas where a supervolcano could pop up, including Indonesia, the Philippines, several Central American countries, the Andes, Japan, the Kamchatka peninsula in eastern Russia, and even Europe (the area around Kos and Nisyros in the Aegean Sea might be a supervolcano). And a few other supervolcanoes in the U.S. are Long Valley (CA) and Valles Caldera (NM).

Yellowstone National Park sits on top of a supervolcano, which erupted 3 times forming 3 massive calderas (or huge craters). According to USGS, the first caldera-forming eruption occurred about 2.1 million years ago. The eruptive blast removed so much magma from its subsurface storage reservoir that the ground above it collapsed into the magma chamber and left a gigantic depression in the ground – a hole larger than the state of Rhode Island. Later, activity shifted to a smaller region in eastern Idaho, just southwest of Yellowstone National Park, and produced another large caldera-forming eruption 1.3 million years ago. A third huge eruption occurred 640,000 years ago forming the Yellowstone caldera which is more than 60 miles (100 km) across. Together, the three catastrophic eruptions expelled enough ash and lava to fill the Grand Canyon. 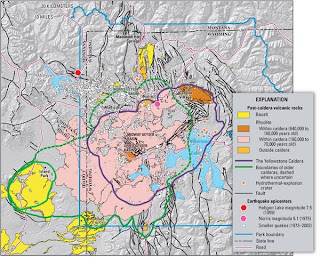 According to USGS/Cascades Volcano Observatory, about 760,000 years ago a cataclysmic volcanic eruption in eastern California blew out 150 cubic miles of magma from a depth of about 4 miles beneath the Earth’s surface. Rapidly moving hot ash flows covered much of east-central CA, and airborne ash fell as far east as Nebraska. The Earth’s surface sank more than 1 mile into the space once occupied by the erupted magma, forming a large caldera. And Long Valley Caldera is only one part of a large volcanic system in eastern California that also includes the Mono-Inyo Craters volcanic chain. This chain extends from Mammoth Mountain at the southwest rim of the caldera northward 25 miles to Mono Lake. The volcanic system is still active. Recent measurements at Mammoth Mountain indicate that the rate of CO2 gas emission is close to 300 tons per day.

But what could be the largest lava flow in history was a massive eruption that occurred in the Siberian Traps about 250 million years ago. According to The Discovery Channel and Wikipedia, the massive eruptive event continued for a million years and spanned the Permian-Triassic boundary, about 251 to 250 million years ago. It is estimated to have killed 90% of species existing at the time. “This is the numero uno candidate for a mass extinction caused by volcanism,” said paleontologist Spencer Lucas, a curator at the New Mexico Museum of Natural History. “There’s good reason to believe it had something to do with that extinction.”

Not all scientists agree that the Siberian Traps were the main reason for the mass extinctions, but the timing of the eruption closely matches up with the P-T extinction. 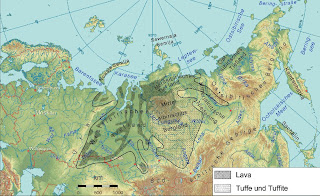 Check back tomorrow for Part 3 of 3 about Safety tips.