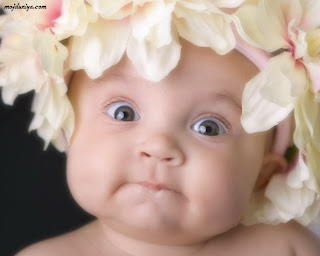 Delivering babies can be a grizzled job. How grizzled?

So there’s a very good reason why obstetricians prepare like nuclear fallout specialists to deliver a baby. They have to fend against an all-out military airstrike with the baby as the Drill Sergeant: “Alright you bodily substances, you better hit ’em with everything you’ve got! Darned, if they make me come out into the world! So bring on the rain!” Then hence starts the artillery.

During one of the last deliveries that I performed, the umbilical cord sought its revenge and sprayed my face like Old Faithful. It was not pretty; kind of like the aftermath of the movie Carrie. I think I heard the dad scream.

For instance, cesarean section yields enough blood to make a general surgeon cry, “oh mommy!”, but then the OB doc pulls out a tiny baby buttocks out of the gaping abdominal wound and everyone in the room goes, “Ahhhhhh! Isn’t that cute!”

Now, you are probably wondering, why I would bother to talk about baby butts in a disaster and wilderness medicine blog. But that’s just the point, just like in the world of OB, anything can happen. And you just might find yourself needing to deliver a baby.

First, in this post I am going to discuss the things that you should have on hand in order to perform an emergent delivery. (Emergent delivery: if you are in a situation where in you can’t contact 911 or are unable to get the laboring mother to a hospital in time.)

In the next post, I will describe how to perform an emergent delivery. This is not to replace the work of medical professionals, instead it is designed to help you handle an imminent situation where appropriate medical help can not be obtained. (Image obtained from www.lifemedicalsupplier.com.)

As for gear, many companies offer pre-made OB kits which you can purchase online, which I personally prefer, because I’m too lazy to make my own. Or you can purchase the products separately and build your own. Lazy way is better. 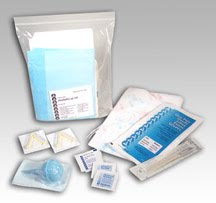 The following is a list of items that should be contained in any Ob kit:

*One pair or more of sterile exam gloves. These are the gloves that are generally worn by OB docs in order to perform sterile cervix exams. I suggest having more than one pair.

*One disposable plastic apron or surgical gown. I’d personally go with the surgical gown, more coverage. You know, from a disaster perspective, I would stock up on disposable surgical gowns, but that’s just me and I am biased towards having more medical supplies.

*One 17″ x 24″ under pad. In the medical arena, we call these “chux pads“. These are plastic on one side and cotton plush on the other. The closest thing out in grocery stores to them are puppy pads, but I wouldn’t suggest using a puppy pad for delivering a baby.

*Disposable Absorbent Towels. I would stock up on these. They are good for any medical emergency dealing with body fluids.

*Biohazard bag. Again, good for any medical emergency where instruments can become contaminated with fluids.

*Plastic Drape sheet. Okay, I have to admit that lots of blood equals need for lots of plastic coverage, whether it be in the wilderness or in your home.

*One heavy duty feminine pad and Ice. I personally like the ones that you can either fill with ice or can open enough to shove ice in them. The ice helps alleviate the pain that occurs post-partum in the perineum. The pad itself absorbs the post-partum blood.

*At least Four Sterile 4 x 4″ guaze sponges. Really, if you don’t have these in your emergency medical kit already than you have a very poor quality kit. 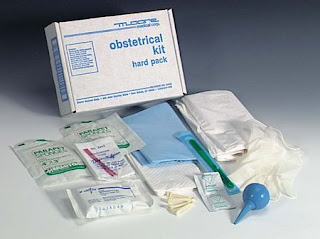 *One Sterile Scalpel. Preferably a #10. (Image taken from www.canfsupply.com)

*One Sterile 2 oz bulb syringe. I think this should be in any emergency kit notwithstanding whether the kit is designed for baby delivery or not.

*Alcohol Prep pads. Okay, these are a must regardless.

*At least two Sterile Umbilical Cord Clamps. Or you can use Kelly Hemostats. (To sterilize the hemostats: Place hemostats in water that has been brought to rolling boil for at least 15 minutes. Note: water sterilization kills most bacteria and inactive viruses, but doesn’t kill prions which are the cause of Bovine Spongiform Ecephalopathy [also known as Mad cow disease] or Creutzfeldt-Jakob disease. But most likely, you won’t encounter Prions on clean medical equipment.) The sterile clamps are the cream colored plastic pieces seen in the picture.

If you are unable to obtain these things, or they are not on hand when an emergency birth takes place. Get out your boiling water, toss a sharp blade in and some shoelaces. Boil for 15 minutes.

In a later post, I will describe the different types of sterilization techniques.

Next time, we’ll discuss how to perform an emergent delivery when birth is imminent and medical help is unavailable.

This is a repost from Wilderness Medicine and Disaster Preparedness. You can read more from little doc there or in the APN forums Dear Littledoc. Littledoc says that the advice given in this forum should not replace the advice of your primary care physicians. The American Preppers Network is not responsible for any medical advice given, or taken, at this forum or blog