I can’t remember the last time I played a board game. It may have been 40 years ago, playing Clue, or Monopoly, long before I discovered computers & computer games. I don’t know why it’s been so long. Board Games are great family fun. It’s something everyone can get involved with sitting around the dining room table. Something to enjoy that doesn’t involve a TV remote control or internet access.

So when I got the call that I got a Board Game heading my way to review, I was a bit reluctant at first. After so many years, so many other after-dinner pastimes, so many internet or electronic games, this one better be good. Turned out it was. It was The G.O.O.D. Game, from killswitchbunkergames.com.

The G.O.O.D. Game, a.k.a  The “Get Out Of Dodge” Game, lived up to it’s title. It was adventure, it was survival, it was hilarious.
Imagine Monopoly for a Zombie Apocalypse, or The Game of Life where a box of MRE’s is worth more than your penthouse apartment in the city. Because in this game, you NEED to flee the city. Civilization has collapsed, & you need to bug out with only what sparse supplies you can carry or scrounge along the way, to your safe house in the hills.  But along the way you need to watch out! So many traps await you, you could wind up arrested in a FIMA Camp, or starving on top of Freeze Your A** Pass. 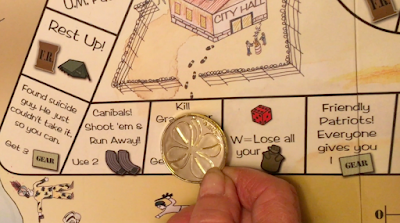 You’ll use your wits, your luck, & occasionally your skill at bartering, to see your way through. It’s ultimately the roll of the dice that’ll determine if you are lucky enough to survive your journey, to make it to your bug out haven in the hills.

Amazing that Susan Hillemann-Hogue, who designed The G.O.O.D. Game, could make S.H.T.F. a entertaining board game, but she sure did, along with a bit of tongue-in-cheek humor too. A few left-handed social comments thrown in the game along the way will have you giggling in your Flak Vest, as you move your player piece along the board. BTW, since this IS a game of survival, you make your OWN game piece. Just be sure whoever uses a live .50 FMJ round as their game piece, gets first roll. 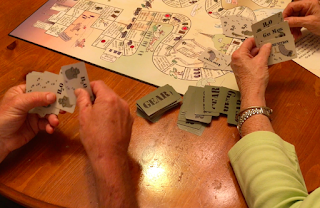 The Game Board is large & hilariously illustrated. Gameplay is roll the dice & land your game piece on a space, if it tells you to follow the instructions on the included “Determiner” Card, you’ll do what the card says. It’s pure luck if the outcome helps your cause, or beats you bloody, you take your turn to find out. Land on a space along with another player, you can barter your gear. Just be careful, one’s man’s treasure may be what you NEED the next turn you have. Ultimately, one person will get through & win, but along the way a whole evening will be spent in some fun survival & a battle of wits. Be sure to pack some smarts… you’ll need it.  NOTE: Contains some Politically Incorrect Material & Some Harsh Language.

Yes, I got to say it’s been at least 40 years since I last played a board game. But I’m glad the long dry spell is over, & it was by a good board game I got to play. The G.O.O.D. Game.
Available directly from the great folks at killswitchbunkergames.com