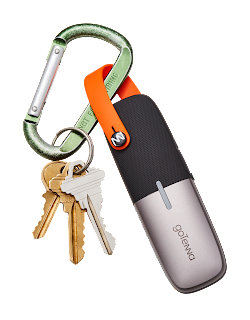 BROOKLYN, NY (Sept. 28, 2016) — goTenna, the company that last year released the first and only device that enables smartphone users to communicate without cell towers, wifi routers or satellites, today introduces a new breakthrough product: goTenna Mesh, the first 100% off-grid, mobile, long-range consumer-ready mesh network device, which will be available internationally. The announcement comes along with the launch of goTenna’s premium service, goTenna Plus, and the release of the goTenna open Software Development Kit (SDK).

goTenna Mesh pairs with any iOS or Android device to allow users to text and share GPS locations, up to several miles away depending on terrain and elevation. This is the first goTenna product that will be available outside the United States and it will be sold in pairs for $179 but is available in limited quantities at promotional pricing (starting at $129) today on a preorder basis before shipment begins later this year.

The company’s first product, goTenna, will now be available at $149 for a pair. No subscription is required, in line with the company’s commitment to empowering people to create communication on their own terms.

goTenna Mesh is anchored by intelligent mesh protocols (named “Aspen Grove”) that deliver a 100% off-grid, entirely mobile, long-range mesh network. Such a technology has never been achieved outside hulking military tactical systems that cost tens of thousands of dollars per unit.

goTenna Mesh is smaller, sleeker than goTenna’s flagship product, and provides even greater utility thanks to the introduction of mesh networking. By automatically and privately relaying your message through other users if your recipient(s) are not within point-to-point range or are otherwise obstructed, you can effectively double or triple your range and be likelier to get a message through in difficult situations. Unlike traditional communication networks, goTenna Mesh gets stronger the more users join it, though it can be useful for even just two users at a time.

Like the original goTenna, whether you’re spending time outdoors, packed into a crowded event, traveling overseas and in rural areas, or find yourself in an emergency situation, goTenna Mesh keeps you connected in an even more powerful way.

The goTenna SDK allows any developer to use goTenna hardware and protocols to transmit small bursts of secure data, at long ranges, completely off-grid. The SDK is designed to be incredibly simple, with SDK users reporting integration times of less than 2 hours for full functionality. While in beta this summer, the SDK has been used by groups ranging from the U.S. Air Force to health tech companies.

Available for preorder on Kickstarter for the next 30 days, a portion of funds raised will be donated to the international non-profit Telecom Without Borders (Télecoms Sans Frontières – TSF) to support their work setting up humanitarian communications operations in crises and disasters throughout the globe, from Syria to Burkina Faso and Nepal to Haiti. TSF is often the first on the ground setting up emergency communications for disaster response, in refugee camps and at medical facilities.

To learn more about goTenna Mesh, visit their Kickstarter page.

Protecting Yourself Against Identity Theft As A Prepper