When I received this assignment, I was skeptical. Certainly, communications modes are a specialty I’m familiar with, but I’m no Platoon Leader, and my days of playing Army Man is a bit behind me. Besides, this is a review of kids flashcards, my last dealing with was in learning math in grade school.

But I was surprised when I examined the deck of cards of the Phonetic Alphabet, I immediately got the concept & it’s potential. Then, when I tried out the deck of Army Hand signals & American Sign Language, it struck me that these flashcards are invaluable for not just kids, but for adults too.

Communication in it’s purest sense is simply transferring information from one place to another by any means necessary, either verbally, or non-verbally. So while from the standpoint of preparedness, the ability to convey information clearly & accurately is paramount, the ability to also do so silently can be vital.
So here’s where these flashcards come in handy, (pardon the pun).
Use of hand signals offers clear communication totally unspoken, as any misbehaving youngster frozen in mid-frolic by Mom & Dad pointing at them can attest. Message CLEARLY conveyed. 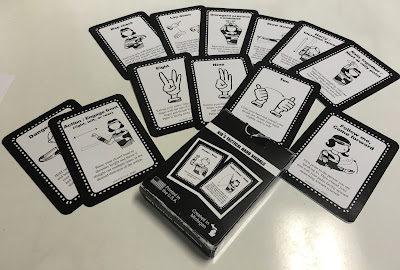 Each flashcard offers a term or statement with an illustration of it’s accompanying hand gesture. There’s also directions on how to do the gesture.  By learning to recognize the gestures and connect it to the word or statement, standard terms & gestures can be strung together to make whole sentences or concepts. By repetition of using these cards anyone can become proficient in using hand signals.
Like I said… very handy.
It didn’t take long at all for this old dog to learn some new tricks, not long at all.
Hand gestures are useful…(bet you thought I’d say HANDY again), if ever I’d be in a situation where I NEED to communicate without speaking a word. Serious stuff, like  HURRY! THIS WAY to the RALLY POINT.

While Alpha Bravo’s Hand Signals for Kids helps kids add realism to their playacting, what you can learn from them can be a vital aid for anyone in a disaster to emergency. 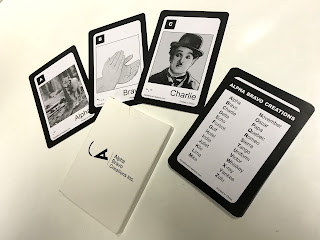 Next came the deck of flashcards teaching the Phonetic Alphabet.

If you’ve ever seen a Cop show on TV or a Hollywood Blockbuster War Movie, someone is always talking over a mic saying stuff like”Foxtrot Uniform Bravo Alpha Romeo“…or some sort of drivel. It’s not heatstroke that’s got the actor talking gibberish, it’s the PHONETIC ALPHABET, used to verbalize individual letters using spoken words. Tango is the letter “T”, India the letter “I”, Charlie the letter “C”, and so on.

Using phonetics is handy when noise conditions make it hard to discern single letters. Sounds like “Eee” & “Tee” &”Cee” can often be misheard in a noisy location. So by attributing a word starting with the letter, it’s easier to understand, because you’re more likely to hear parts of a word and mentally fill in the blanks.
With the Phonetic Alphabet Flashcards,  Alpha Delta Creations has presented each letter with a picture symbol depiction of the word, as well as it’s corresponding Morse Code symbol.


HUH! What? Morse Code? Hams do Morse code! Heck, even Rambo tapped out Morse code to send a message in one of his movies! Morse Code is HANDY!

While not a requirement any longer to know Morse Code, it’s still a widely popular mode of communication in Ham Radio, the dots & dashes able to be heard & deciphered, when signal conditions are so poor that vocal speech is “in the mud” & unrecognizable.

I know very well the phonetic alphabet, but I never acquired Morse Code. So now, armed with a set of flash cards depicting them, I’ll bet picking up the code could be just as easy as picking up these cards.

My review started out skeptical, but I quickly came around. I seriously suggest getting your kids these flashcards & using them yourself. Who says kids get to do all the fun? In fact, make learning how to do Tactical Hand Signaling AND the Phonetic Alphabet & Morse Code a family fun project. One that may pay SERIOUS dividends later.
(I almost forgot… did anybody catch the reference of “Foxtrot, Uniform, Bravo, Alpha, Romeo”? Learn the Phonetic Alphabet & watch Saving Private Ryan till you do. )
LEARN MORE or ORDER a set of flashcards, visit Alpha Bravo Creations Website. www.alphabravocreations.com