Can a measly few watts of power make much difference?

When folks at Baofeng Tech asked me if I’d review the new 8 Watt UV-82HP UHF/VHF ham radio, the FIRST thing I thought of was comparing two different models against each other at their max power setting, and see how great a difference there was in range. A totally unscientific comparison, but doable, since I already own two Baofeng’s, two Baofeng UV-5R’s. I figured it would settle, (at least in my mind), the range question from a practical standpoint, plus give a reference point radio to compare.

Let’s start with a first impression…

UV-82HP: you can play the FM radio for three 8 hour days at work on a full battery charge.

For some, (like me), that’s important. It’s also a practical test of current drain, like keeping the radio turned on scanning memory banks all day. Figure around 18 to 24 hours service between charges under light duty cycle.   Audio volume and clarity is VERY impressive. I’m also impressed with the radio’s fit and feel. There’s substance to the radio, but because of it’s slim form factor, there’s no problem with it clipped to a pants pocket all day. It’s not a bulky brick.

If ever I hear some blow-hard spout off about “cheap Chinese Radios” I’d hit them with this one… it’d leave a dent.

The LED flashlight has an enclosed lens and reflector focusing the light. A radio with a built-in flashlight is occasionally more handy than the radio itself.

UV-5R: (First this Crevat: I LOVE my UV5-R’s)  The radio resembles a handheld radio version of a Sherman Tank, a small Sherman Tank. While the ’82 is slim and curvy, the ‘5R is not. Part of it’s appeal has been it’s utilitarian chunkiness, however, I found the ‘5R to be a bit little top heavy clipped to my belt, the antenna trying to upend the radio, so I seldom kept the radio clipped to my side for long. I usually just carry them around. As for volume, compared to the ’82…it’s no comparison, the 5R’s speaker sounds thin and tinny, the female voice commands a mumble most of the time.

Please understand, while both radios have the same circuit design, I’m comparing Apples to Oranges here, the UV-82HP is a different radio model from a feature standpoint, as well as performance, as I soon found out. First… testing how both models compared working from a level playing field.

Testing for typical performance, I used both of my stock UV-5R HT’s and the ’82HP at the same power output, to compare signal reports through a local repeater about 5 miles away.

I discovered the UV-82HP receiver had some signal fading due to antenna orientation, vertical being distinctly stronger than horizontal. So did the UV-5R’s, only not as much.

Holding the radio upright, the received signal clears up fine. It’s not a big problem, it just means I can’t look cool holding the radio sideways like they do on TV or in the movies.

All things the same, only different…

It turns out under identical power levels and operating conditions, the UV-82HP’s transmitted audio signal into the repeater was louder than both UV-5R’s. This was confirmed through signal reports from my contact, who didn’t know which radio I was using. Perhaps carrier deviation is just hotter in this particular HT, but over all, the UV-82HP had a better quality signal than both of my UV5-R’s.  Actually, I’m more lead to think it’s the battery capacity of the different radio models making the difference, the UV-5R’s using stock 1500 mAh. batteries, vs the UV-82HP, with 1800 mAh. (That’s a little radio tech secret… you get a cleaner signal with greater battery capacity.) The batteries and supplied chargers are not interchangeable between the UV-82HP and the UV-5R.

This may also explain the longer duration between recharge, just listening to the FM radio.

On testing extreme range, I tried all three radios… the two UV-5R’s, and the UV-82HP, to get into a distant repeater, each using the radio’s highest transmit power.

It ended up being no contest…

For this test, I worked into the 1500′ blowtorch of the Pee Dee region, the W4PDE 2 meter repeater outside of Dillion SC. It’s 57 miles away, and generally covers a 125 mile radius.

After several attempts, both UV-5R’s couldn’t raise the repeater, no response at all.

I expected that. It was quite a stretch to expect the 4 watt UV-5R’s to get that far, especially with me standing at street level. But surprisingly, the UV-82HP hit the repeater first time with ease.  My contact, Tim W2SOC, reported my signal clear and readable with some white noise on my signal. Still, a VERY respectable report. Later on that evening, back home in the woods, the UV-82HP reached the Dillion repeater again, this time at 50 miles away. But sadly, both UV-5R’s couldn’t cut the mustard again. I have to say in the past, I had reached the Dillion repeater from my front porch, with one of my UV-5R’s …on a good day. But this wasn’t one of those days for a UV-5R, it was however, another day in paradise for the UV-82HP. 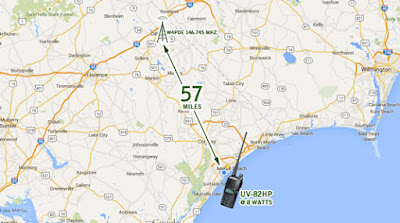 All things being the same, the UV-82HP has better signal quality overall than my UV-5R’s. As for it’s greater power settings, it’s obvious the radio’s range is significantly greater.

At this years local field day, the UV-82HP was the belle of the ball because it was NEW! 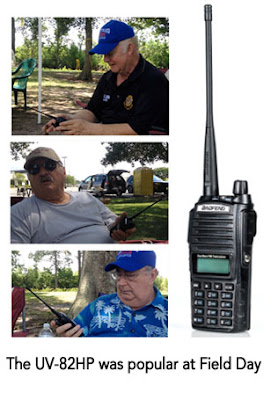 I got the radio in the hands of as many Hams as I could for their feedback.  Owners of UV-5R’s liked it’s fit and finish, and everyone liked it’s greater power output. Those who own older UV-82’s were envious, but knew it was the logical next step in the model line.

The two-button PTT feature, used to select between two banks of memory, was initially confusing for UV-5R owners, but they quickly caught on to how it eliminates need to manually select between memory banks, and allows you to work two separate stations, just by pressing one or the other key button. If you don’t like the feature, you can turn it off in the settings using programming software.

One noted the ’82 seemed more geared for using preset memories, which it is, arriving out of the box set up in channel mode. You hold down the menu button when turning on, to switch the radio to frequency mode. I also showed both radios to Hams who don’t own neither radio, asked them to pick which one they like. Most chose the UV-82HP over the UV-5R because it felt “more like a radio”, (One even called the ‘5R “a toy radio”)

Assessing ease of use.

Right off the bat I noticed manual programming is more refined than with the UV-5R series, however, a practiced hand is still needed to set up and load memories manually. It’s obvious the radio begs to be programmed plugged into a computer, using programming software like CHIRP.  Incidentally, the ’82 doesn’t come with programming software or a USB programming cable. Not a problem with those who already have a earlier model Baofeng, but if you’re new to the brand, you should consider getting the programming cable too. Trust me, you’ll want one, even with this radio. The included manual is thick, informative, and written by someone here in the US.

Using the most recent daily build of CHIRP software, (it’s very good free software BTW), and accessing repeaterbook.com for the local repeater list, I had the radio on the air, 5 minutes out of the box. 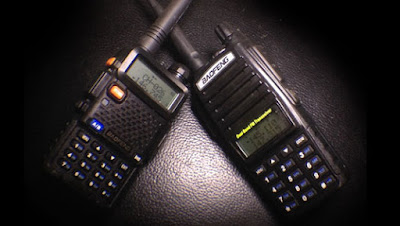 I’m impressed with the UV-82HP, it’s a big step up from the UV-5R, with a more refined design. Overall, the radio is easy to set up using programming software and a USB cable, (which most Baofeng radio owners already own), and it has plenty of transmit power. It’s a perfect alternative to the popular high power variant of the UV-5R, the Baofeng BF-F8HP. It appears cross-compatibility of batteries and chargers between same model series radios would be a factor. If your comfortable with how a UV-5R operates, and seek greater power, then go with the BF-F8HP. However if you seek a more refined design in functions and form, along with very respectable range, you should take a serious look at the UV-82HP, I think you’ll be very glad you did.

Be Heard in Any Disaster with Unstoppable Communications